What dances are included in Burn the Floor?

What is meant by Standard Dances?

Standard Dances are the five dance styles judged in international competition. They are:

The Waltz is a ballroom dance in 3/4 time, with a strong accent on the first beat, and a basic pattern of step-step-close.

The Foxtrot is a slow, syncopated 4/4 rhythm, in a slow/slow-quick/quick count and employs the fashionably rebellious use of “trotting steps.” In 1927 it was renamed “slow foxtrot” and was characterized by smooth gliding movements.

The Viennese Waltz, the oldest of the ballroom dances, is a 3/4 rhythm which began as a peasant dance in Provence, France in 1559 and became a craze in Viennese dance halls in the early 1800s.

The Tango originated in Argentina and was brought to Paris in 1910. The international tango was born in the 1930s and combined the proud posture of the other ballroom dances with 4/4 rhythm, staccato action and walking steps, that move around the ballroom floor.

Quickstep is an international style ballroom dance that follows a 4/4 rhythm, similar to a fast foxtrot. It evolved from dances in the 1920s like the Charleston and the influence of the ragtime music popular during that era.

What is meant by Latin Dances?

The Cha Cha, a Cuban dance, became popular in the 1950s. It is an offshoot of the triple mambo and has a 4/4 rhythm. It is fun, flirty, playful, and is known as the “afternoon dance.”

The Samba, the “ladies dance,” originated and is still celebrated in Brazil. It is fun and festive. The fast and intricate cross percussive music and steps are danced to a 2/4 rhythm.

Paso Doble is of Spanish origin, though it was developed in France. Using a 2/4 rhythm, it is a highly stylized dance that is based on the Spanish bull fight and uses marching steps. The man represents the matador; the woman the cape.

The Rumba has a 4/4 Cuban rhythm and is the slowest and most sensuous of the Latin American dances. This is the dance with the most sexual tension and is known as the “dance of lust.”

The Jive is based on jazz and improvisation. Set in 4/4 time, this dance originated in the United States in the early 1940s. It relies on African American rhythms. It travelled to Europe when American soldiers brought the Lindy Hop/jitterbug during WWII

Have Burn the Floor dancers appeared on television?

How can I join the cast of Burn the Floor?

How can I learn to dance?

Most cities have dance schools and dance instructors. Look them up and start dancing! Subscribe to our YouTube channel here and follow our “Dance Inspirations” series of videos. 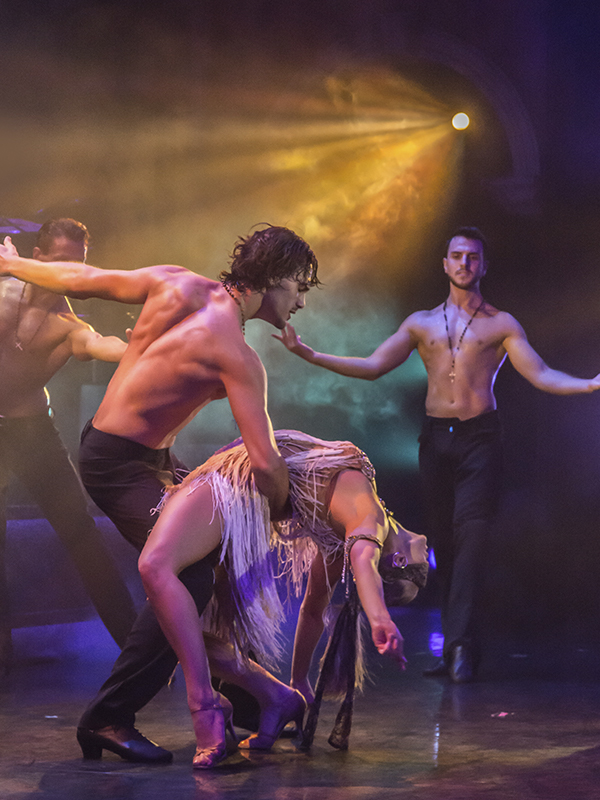 Get all the latest news, special offers, ticket updates and merchandise releases